Feb 4, 2019
The Jani-King of Nova Scotia team was proud to present long-time Franchise Owner, Miguel Sanchez, with a plaque celebrating his 10 year anniversary owning a Jani-King Franchise.  Miguel is dedicated to building a strong business and that shows in his work each and every day.  Congratulations Miguel - thank you for letting us be a [...]
2 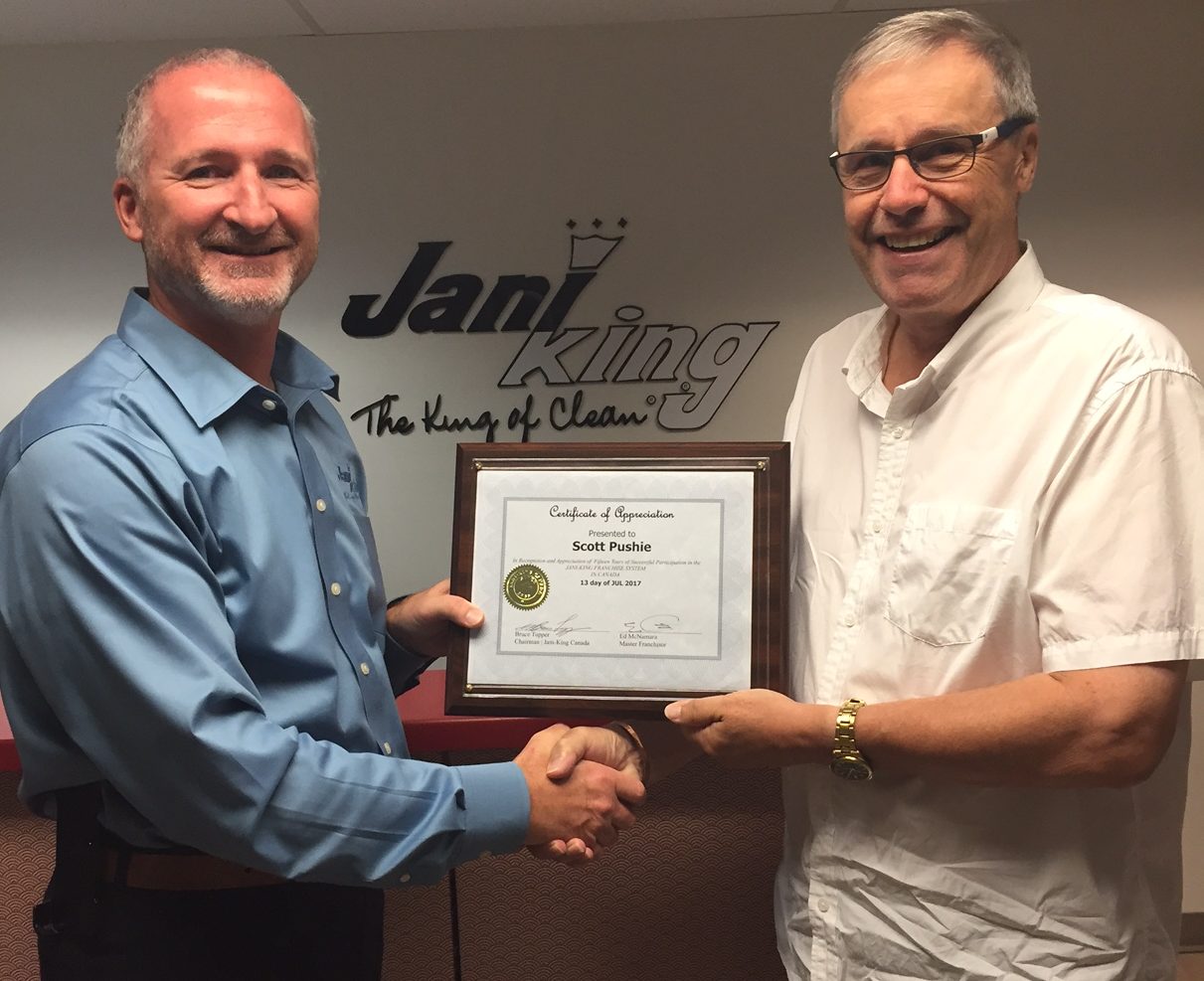 Sep 18, 2017
Regional Director and owner of Jani-King of Southern BC Doug Weaver mans the table. Jani-King of Southern British Columbia had a great day participating in the Black Press Extreme Education & Career Fair on September 14 at the Kelowna Curling Club. The event was a success for attendees and those offering career opportunities alike. In all, [...]
4

Feb 7, 2017
Jani-King always stays at the leading edge of innovation in the commercial cleaning industry; it’s how we offer the best service possible to all of our customers. To ensure our franchisees always have the latest information and knowledge, the Jani-King Ottawa regional support office hosts an annual franchise development day, this year occurring on December [...]
7

Jani-King is the top-rated global commercial cleaning franchise*. We are known for our attention to detail and providing consistent, reliable cleaning services – but we don’t just stop there. In an industry with a wide array of service providers, Jani-King prides ourselves on our professionalism – case in point, meet Joven Ednalaguim. Joven is one […]

Ongoing training and support are pillars of the Jani-King system. In addition to hands-on and e-learning training, we also bring our entire team together each year to talk about the trends facing the commercial cleaning industry, review new technology and equipment, and network with local suppliers and our own team of independent business owners. “ […]

Changing career paths can be an intimidating prospect requiring one giant leap of faith – and there are no guarantees it will pay off. That’s exactly what Muthu Rajendran did when he made the decision to enter the world of franchising. Since starting his commercial cleaning franchise in 2009, Muthu has grown his Jani-King franchise […]

The thought of changing careers can be daunting – especially when the decision means leaving the security of a position in the corporate world and starting your own business. That’s exactly what Greg and Lisa McNeil did in 2002 when they started their Jani-King franchise. We sat down with Greg and Lisa to learn how […]

Every month the team at Jani-King’s Winnipeg office selects a charitable organization to support either through charitable donations or in raising awareness. In May the team hosted a donation drive for Siloam Mission. Since 1987, Siloam Mission has provided meals, clothing, and hope services to Winnipeg’s poor and homeless community. A connecting point between the […]

April Coughlin of Smiths Falls, Ontario, recently invested in a Jani-King franchise. Hailing from a farm on the outskirts of Toledo, a small village in Ontario, April is no stranger to the franchise world. At age 15, she started her first job at a local Tim Hortons. Since then, April has gone on to obtain […]